Warning: count(): Parameter must be an array or an object that implements Countable in /misc/29/000/198/298/9/user/web/mfonfoto.org/wp-includes/post-template.php on line 284 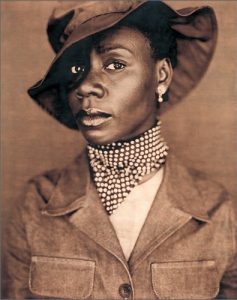 Mmekutmfon ‘Mfon’ Essien, a Nigerian-born American photographer, was born in the village of Ikot Ekpene in Nigeria, came with her family to the United States settling in Baltimore when she was two. Mfon studied literature and art at Morgan State University in Baltimore, and then moved to New York, where she started to work as a fashion photographer.

Mfon was a trail-blazing, visionary photographer who first exhibited with New York gallery, Rush Arts in Chelsea in 1996. She exhibited at the Senegalese Biennale in Dakar, Senegal and received an honorable mention in the American Photo magazine annual survey of the nation’s best photographers.

Her last work, produced after she underwent a radical mastectomy, was a series of nude self-portraits titled “The Amazon’s New Clothes,” two of which were in the seminal exhibition “Committed to the Image: Contemporary Black Photographers,” at the Brooklyn Museum of Art in 2001.

Mmekutmfon ‘Mfon’ Essien transitioned Feb. 13, 2001 of triple negative breast cancer in New York four days before the opening of the exhibition. She was 34.